What is Slip Casting?

Slip casting allows the artist to reproduce the pottery with small variances.  Slip casting is used to produce pottery, figures, sculpture, and sanitary ware such as toilets and sinks.

Liquefied clay (casting slip) is poured into a plaster mold.  The plaster mold is absorbent and will begin to draw water from the casting slip.  The longer the slip sits in the mold the more water is drawn from it by the mold and the thicker the casting "skin" becomes.

When the desired thickness is achieved, the excess slip is poured from the mold for reuse.  The remaining “skin” left in the mold is the casting.  It will continue to dry, both by the mold and ambient air, and eventually shrink away from the mold.  When the casting is firm enough to be removed from the mold and stand on its own, the leather hard pot is taken out of the mold and let it dry, or assembled with its corresponding parts.  The mold can then be cast again with slip.

Simple casting can be left to dry and complex forms can be assembled at this stage.  Attach handles, spouts, feet, knobs, and place lids on the body of the form.  Seam lines (fettles) can be cleaned up at this stage or left until the casting is completely dry.  Moving the casting during the leather hard stage can create stress cracks in the form.  The can appear either in the bisque stage and sometimes not until the form is glaze fired.

Casting slip is completely different than ordinary clay slip.  With the addition of a deflocculant (sodium silicate or Darvan) the electrical charge of the clay is neutralized.  The particles change from having both a positive and negative charge to an all negative charge.  Like two magnets, the like charge poles of the magnet repel each other.  The clay particles with negative charge will do the same thing.  With just enough water to form an envelope around each particle, the casting slip will stay in suspension.  Terra sigilata is made in a similar manner, but excessive water is added to the mix so that the particles repel each other and slowly settle in the bucket with the finest clay particles above the heavier particles. 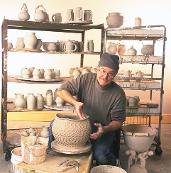 The development of slip casting is credited to Ralph Daniel of Coolidge, Great Britain in 1743.  Slip casting becomes a practical process for reproducing duplicate shapes quickly and efficiently.

Hand-building these same complex shapes can often be labor intensive.  Making the mold for casting is difficult and time consuming, but has it's rewards in the speed of reproducing the same shape with great accuracy.  Like any forming method, there are parts of the process that are easily learned and others that take more time to absorb.